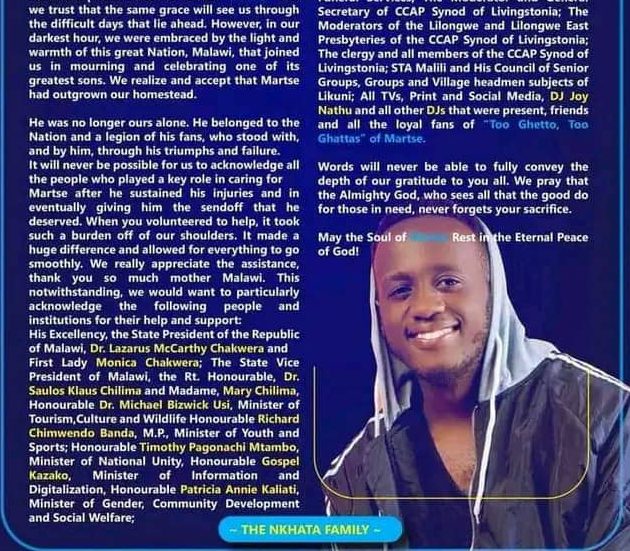 The Family of Martin Junior Nkhata alias Martse, Malawian Hip Hop artist who died on 23rd May 2022 has thanked the people that came through to help them in the difficult time.

In a letter addressed to the family, friends and fans at large from all over Africa, the family was overwhelmed by the love shown to their son. Noting that, Martse was not theirs alone but loved by many and made him their own as well.

The letter depicts Martse as a son, uncle and a loving cousin. A legacy that has been portrayed in all his entire life to his last breath.

Martse was a helping hand, as we know. Days before he died he had pledged to help the vulnerable students at a named school. Too bad death came and cut that short.

Some of the people and organizations that were thanked were the : the Musician Union Of Malawi, The inspector General Of police, Stuff Members of the Mangochi Hospital, CCAP Synod of Livingstonia to mention but a few.

It is indeed, a road that has ended short but the legacy will live on for years to come. Martse was an artist that loved and was loved to the end